I first met Michael in November of 2008, I think we decided that's when it was... He is Anthony's first cousin. Anthony is my sister's husband. Ashley is awesome. Anyway, this is about Michael...

So we met at Anthony's parents house and that was pretty much it for awhile. We were friends for a couple years and our communication mostly involved texting each other song titles back and forth that we heard. It was mostly sweet 90's alternative music. When I would come home from college, the four of us always hung out - Ashley, Anthony, Michael and I. It was like a weird double dating situation because Michael and I were just friends, and we would sit and chat while Ashley and Anthony snuggled on the couch lost in their own world. We got to know each other though. I thought he was a nice guy, a little nerdy... but nice. And funny, he's always been so funny to me!

Ashley had it planned in her head for years that Michael and I would end up together. She used to invite us to dinner parties, Bible studies, movie nights, out to eat or anything else that involved forcing Michael and I to spend time together. We did spend a lot of time together. He even came up to New York to visit me in college a couple times. Looking back on that, I'm so glad he did. He got to experience a huge part of my life. 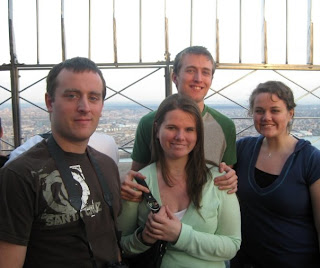 See, Michael likes working on computers and anything else involving technology. He also loves photography and nature and cuddling. So now you have this stereotype in your head about him. Now let me tell you that he works for a metal fabrication shop designing parts on his computer that are cut out of huge, heavy sheets of stainless steel... so he comes home from work wearing ripped jeans, steel-toe boots and usually covered in grease. He knows how to build a house from the ground up with his bare hands. He has biceps that make me want to have his babies every time I look at them. And he is now my personal auto mechanic because he can fix anything on a car, plus I love watching him do it. 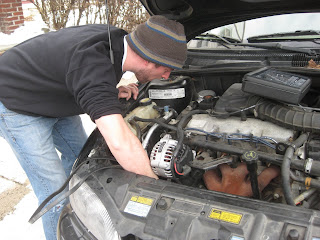 Whoa! Just got way off track there. Moving on...

We made the switch from friends to more-than-friends last Christmas (2009) when our communication grew. I spent a lot of time with him while I had off from work for the holidays. I was visiting DE and staying with my parents for about a week. One special night, he told me he wanted to fix my super-slow and very sick computer. I mean sick with viruses. He spent six hours backing up all my pictures and documents, formatting my computer, reinstalling windows, putting all my data back on my computer, and whatever other techie things went down that night. It was seriously the nicest thing any guy had ever done for me. What a change from all the completely selfish boyfriends I've had in the past. I started to see Michael in a whole new way.

I fell in love with his selflessness, his kindness, his passion for life... He's the kind of guy that goes out in the freezing cold night to start my car so it's warm when I get in it. He opens doors, pays for everything, asks me on dates, cooks me romantic dinners and sends me flowers. He pays attention to me. He tries so hard in our relationship. He is wonderful. 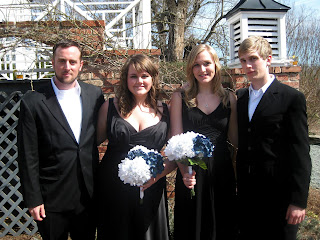 We were in my awesome sister's wedding together. Cute. We also do lots of fun things like weekend trips to visit my friends in New Jersey and New York. We once took a day trip to the inner harbor in Baltimore, Maryland. We go on bike rides by the beach. One time we went on a boat tour around Manhattan. 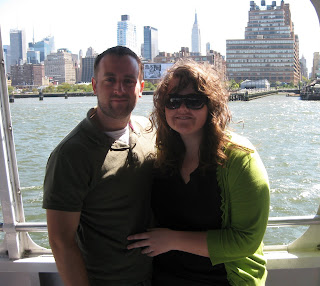 This is all terribly out of order. Let me try to get back on track...

Michael and I started dating in January of 2010. Our first date was to the movies to see the Blindside. We also drove around lower Delaware looking at some houses he had built when he worked with his uncle. Our first "official" date was in King of Prussia, PA. We met in the middle. He took me out to a fancy, romantic dinner at Ruths Chris. He bought me a bouquet of my favorite flower, tulips. 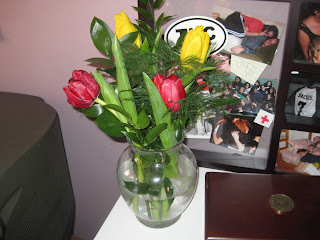 That's the first bouquet of flowers I ever got from him. Certainly not the last. It's cute because there are 4 tulips. This was before he understood my need for having an odd number of flowers in an arrangement. One of my many OCD qualities.

To spend time together, he would drive 3 1/2 long hours to visit me in Jersey. Sometimes we would meet in the middle for dates in the Philadelphia, PA area. A few months went by.

Before long, I moved back home to Delaware in March of 2010. I left my friends, my job, my cute apartment - but I don't regret it for one second. I just look at him and know it's where my future is. And my future is filled with joy. 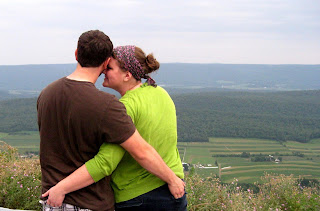